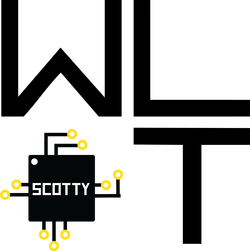 These are not just anecdotes. Instead, they are emblematic of a larger trend occurring in the public markets. Below JP Morgan Asset Management put together a chart detailing the performance of some of the largest tech-IPOs in the last few years. Of the 17 companies tracked, 15 (88%) have sunk below their IPO valuation in the months following their public market entrance. 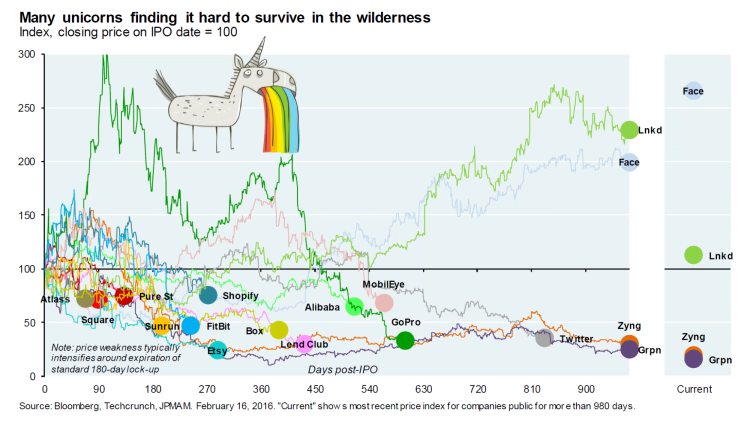 Indeed, the graphic designer had a bit of fun as well. The point this chart is making, however, is striking. Today I am going to present three hypotheses that attempt to explain the precipitous drop in public market valuations of many high-growth tech companies in the months following their IPOs. While this list is by no means exhaustive nor sufficiently tested, I hope to add a voice to the discussion of how “unicorns” fit into the public markets.

Hypothesis #1: Public and private market metrics are not compatible.

Whereas private companies can often trade at 10x, 20x or even 100x their revenue, public multiples are significantly lower. Mahesh Vellanki found that these public market multiples are typically in the range of 2x to 10x based on a company’s industry group (Social Media, eCommerce, Marketplaces etc.) The reason for this discrepancy can mostly be explained by risk appetite and time horizon. Private investors have longer time horizons (often 5 – 7 years) and are willing to take more risk on the future valuation of an investment. Public market investors invest based on a shorter time horizon (typically 1 – 2 years) that values such companies at lower forward multiples.

Simply put, the drop in post-IPO valuations can be explained by the reconciliation taking place between public and private valuation metrics.

Since there have been some cases of recently IPO’ed tech companies failing to deliver on growth expectations (GoPro, FitBit, etc.), there is a market assumption that such underperformance will continue. This expectation drives a bearish trend in the months immediately following a company’s IPO.

The NASDAQ index (home to most recent tech IPOs) has dropped 10% in the last six months. At least a portion of the decrease in valuations of recent IPOs can be attributed to this negative market sentiment. This factor, however, does not seem to explain the more severe drops (on the order of 20-50%) experienced by many firms.

When companies enter the public markets, they face a host of regulations and disclosure requirements aimed at ensuring transparency and legitimacy. In this environment, it becomes more difficult to use future promises of growth, innovation and profitability to attract investment. Raw financial metrics have to be able to stand for themselves to merit an investment.

As this transparency shines a clear light on the business activities of “unicorns,” many investors may be unsatisfied with the prospects for future growth and choose to invest in other areas. FitBit, for example, exceeded sales expectations in its recent holiday quarter. However, in its guidance for future sales it predicted near flat growth. While FitBit’s long-term potential may remain bullish, short-term clarity of the company’s challenges forced a bearish trend on its stock price. FitBit has dropped an additional 20% since it reported earnings on February 22nd.

There is much to be desired in the public markets: validation, resources, exposure etc. Public market operations, however, are not directly compatible with the aspirations and business models of many tech companies. In some cases, market scrutiny exerts necessary oversight to hold accountable inefficient, unsuccessful or simply irrelevant businesses. In many others, though, strong, viable companies are destroyed by the public markets. Huge losses in market valuations can then lead to brain drain, depressed morale and blind, acquisitive short-term strategic decisions.

“Unicorns” are struggling. Pure exuberance in the private markets might be to blame for much of the devastation in the public markets; however, such a trend should be a cautionary tale for those $1B+ companies still contemplating their public market entrance. Companies like Uber, AirBnb, Pinterest and many more come to mind. In December, I asked the question: Does Uber Have an IPO Problem? My short answer then was “no.” Today, those same arguments seem to playing out to a devastating end for the “unicorns” that ventured too far out into the sunlight.